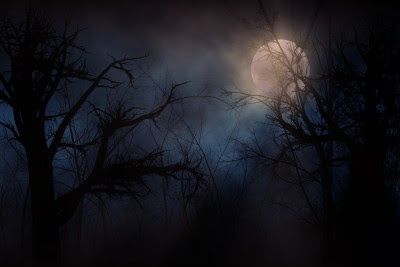 …You had better be prepared to experience more than you bargained for. Especially if the woods in question are in the vicinity of the Kent village of Pluckley. Properly known as Dering Woods, this forest is more commonly known as the Screaming Woods – and for very good reason.

The area itself is situated just south of England’s (arguably) most haunted village – Pluckley – where it seems almost every building and piece of land has its own ghost story to tell. Pinnock Bridge has its Gypsy or Watercress Woman who is supposed to have set herself on fire from a combination of the pipe she was smoking and the gin she was drinking at the same time. She wafts around as a misty figure.

The Elvey Farm has a haunted dairy where an 18thcentury farmer – Edward Brett – fatally shot himself. He is still heard, muttering ‘I will do it.’ 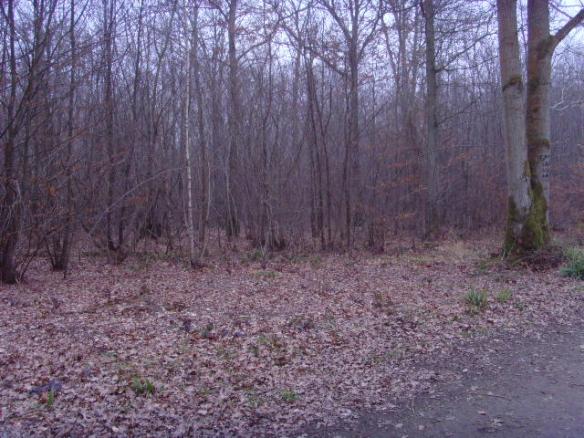 A black silhouette of a miller haunts the site of an old windmill, while a red lady walks her small white dog around the churchyard and a white lady wanders around inside the same church. The locals at the time of her death must have really feared her. She was buried inside not one, but sevencoffins AND an oak sarcophagus. She’s still pacing around there though!

An unfortunate love affair led to the suicide (by poisoning) of the Lady of Rose Court, and a poor man who fell into a clay pit still screams in agony. A schoolmaster who hanged himself is still apparently trapped at the site of his demise.

Now, after experiencing all that, you could well be forgiven for deciding to retire to the local hostelry (the Black Horse Inn). Surely here you could kick back and relax over a pint of foaming ale or a glass of comforting wine? Not a bit of it! After the phantom coach and horses have thundered by outside, expect things to start flying around you as the resident poltergeist gets to work.

But I digress. Back to the woods.

In the 18thcentury, a highwayman called Robert du Bois was tracked down and run through with a sword while he hid in a tree in these very woods. Another version states that he was dragged to the woods before being lynched. Either way, his are the screams which give the woods their name – along with a couple of other unfortunates, such as the army colonel who hanged himself and still can be seen dangling from his tree, and the ghostly soldier who wanders the woodland paths. Others who have simply lost their way – and never found it again – add their desperate voices to the cacophony from beyond the grave. 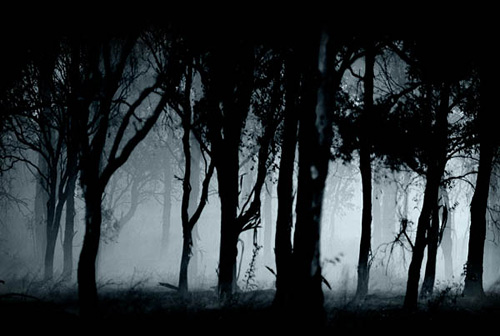 Sceptics might say it’s just foxes. Everyone knows foxes can make a terrible racket. As if hell itself had opened and let the screams of the damned escape.

But those of us who know about such things, don’t need any such explanations.

There are plenty of sinister goings-on – and a terrifying some demon – in my novella, The Devil Inside Her. This is what to expect:

When nightmares become dreams, someone must die

Haunted by the death of her husband and only child, Elinor Gentry’s recurring nightmares have left her exhausted. She’s crippled by debt, and only the remnants of her former life surround her, things she can’t bear to sell, and wouldn’t make much profit from if she did. Then, for no apparent reason, the nightmares transform into pleasant dreams. Dreams that lead her to take back control of her life.

A string of horrific and unexplained suicides–and an unnerving discovery about Elinor herself—lead her best friend to seek help from the one person who has seen all this before, and things begin to spiral out of control. Hazel Messinger knows that Elinor’s newly found wellbeing is not what it seems, and Hazel’s not about to let the demon inside remain there permanently.

You can buy The Devil Inside Her here;

Following a varied career in sales, advertising and career guidance, Catherine Cavendish is now the full-time author of a number of paranormal, ghostly and Gothic horror novels, novellas and short stories. Cat’s novels include the Nemesis of the Gods trilogy– Wrath of the Ancients, Waking the Ancients and Damned by the Ancients, plusThe Devil’s Serenade,The Pendle Curseand Saving Grace Devine.

Her novellas, Cold Revenge, Miss Abigail’s Room, The Demons of Cambian Street, The Devil Inside Her, andThe Second Wifehave now been released in new editions by Crossroad Press.

She lives with her long-suffering husband, and a black cat who has never forgotten that her species used to be worshipped in ancient Egypt. She sees no reason why that practice should not continue. Cat and her family divide their time between Liverpool and a 260-year-old haunted apartment in North Wales.

You can connect with Cat here: 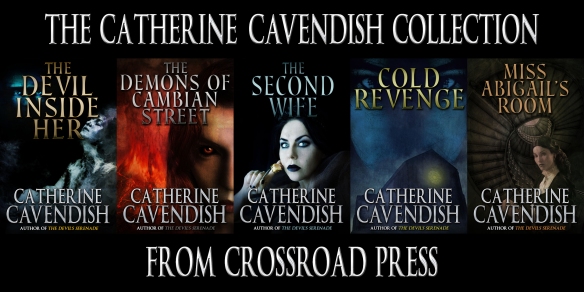 Thanks to Catherine Cavendish for another wonderful guest blog post!
Be sure to read her books, and connect with her on social media. 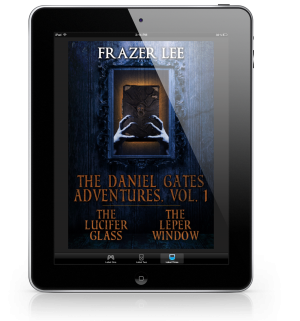 It’s the 13th today, what better date for my occult horror novellas THE LUCIFER GLASS and THE LEPER WINDOW to be available in one volume from Crossroad Press?

Lucky (or unlucky!) for some — depending on your perspective on weird tales of demonic grimoires and cursed artefacts.

kick back, relax, and…

— and wherever occult tomes and evil mirrors are sold.

Explore the links above to read free sample chapters in your browser, or to send them to your Kindle/e-reader/mobile device! 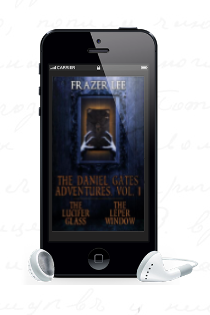 you can take the horror with you – anywhere

ABOUT THE DANIEL GATES ADVENTURES:

Together in one volume, the first two novellas in the Daniel Gates Adventures.

Daniel Gates is a fixer. Whatever his client wants, he can get for a price. But the price of his latest assignment is a high one indeed. He is to travel to Scotland to exchange a rare demonic text, a grimoire, for a consignment of even rarer whiskey. Reading the grimoire, Gates learns of the legend of Lucifer s Glass and the unholy trinity of green-eyed demons who protect it. As he does battle with the demons, Daniel realizes too late that there is much more to his assignment than meets the eye. He is locked in a struggle to save his very soul from damnation.

“Do not gaze into its secrets.”

Daniel Gates’s last assignment involving a rare demonic book left him plagued by hideous nightmares, which are about to get even worse. When a page is stolen from Choronzon’s Grimoire, Daniel is sent to the wilds of North Wales to retrieve it for his mysterious client. But the stolen page contains dark, occult secrets, and he finds to his peril that he is not the only one desperate to find it. Daniel’s journey takes him to the very brink of madness and to the demons that await—beyond the Leper Window.

note to self – if you come across a demonic grimoire in your local library, maybe just put it back on the shelf…

I’m celebrating the release of my new occult novella The Leper Window today.

In the Top 50 Amazon British Horrors…

I hope you’ll join me over at the Horror Writers Association blog, where I discuss some of the inspiration behind the story.

You can also read an extract from The Leper Window and I will be giving away a copy of the ebook to one “lucky” reader.

Thanks for reading,
Frazer x

The Leper Window is out now & available from:

Samhain Horror store
(30% off for a limited time)

(and all Amazon outlets)

And wherever ancient demonic grimoires are sold. 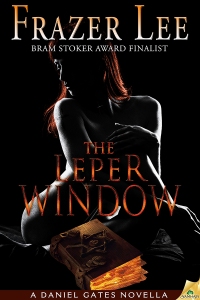 Just in time for Halloween.

The Leper Window is the 2nd in the Daniel Gates Adventures series (which began with The Lucifer Glass) and will transport you to the haunted wilds of North Wales – and beyond into a realm of demons and ancient curses.

If you like that sort of thing then you can pre-order the book today for less than the price of a cup of coffee.

Do not gaze into its secrets.

Daniel Gates’s last assignment involving a rare demonic book left him plagued by hideous nightmares, which are about to get even worse. When a page is stolen from Choronzon’s Grimoire, Daniel is sent to the wilds of North Wales to retrieve it for his mysterious client. But the stolen page contains dark, occult secrets, and he finds to his peril that he is not the only one desperate to find it. Daniel’s journey takes him to the very brink of madness and to the demons that await—beyond the Leper Window.

Early praise for The Leper Window:

And here’s what The Horror Bookshelf had to say about the Daniel Gates Adventures:

“Lee is a supreme talent when it comes to building a sense of atmosphere and that is evident not only in The Lucifer Glass, but his other works as well.…Lee has at least another two books planned in the Daniel Gates universe, but I hope the stories continue well beyond that!”
(The Horror Bookshelf)

And wherever ancient demonic grimoires are sold. 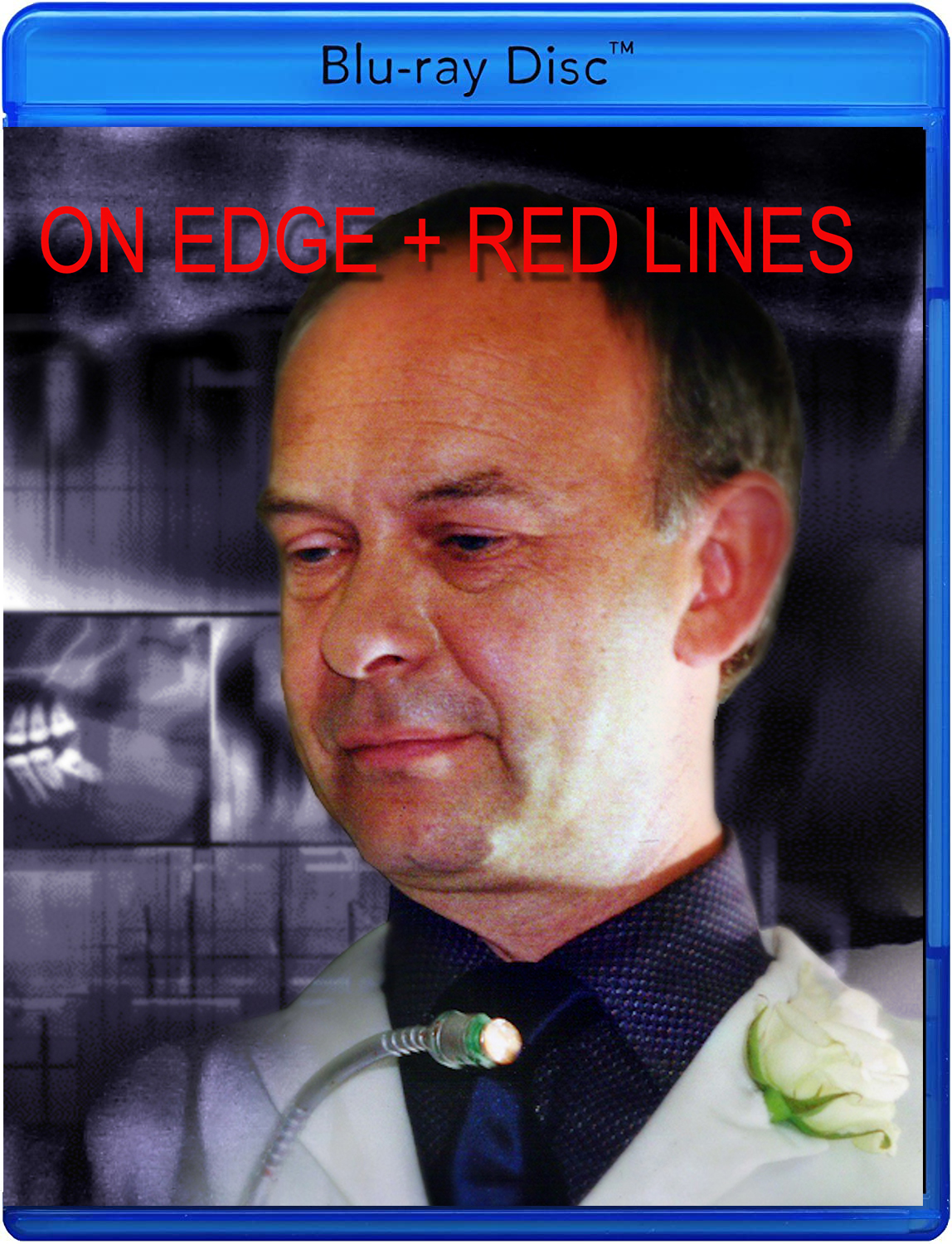 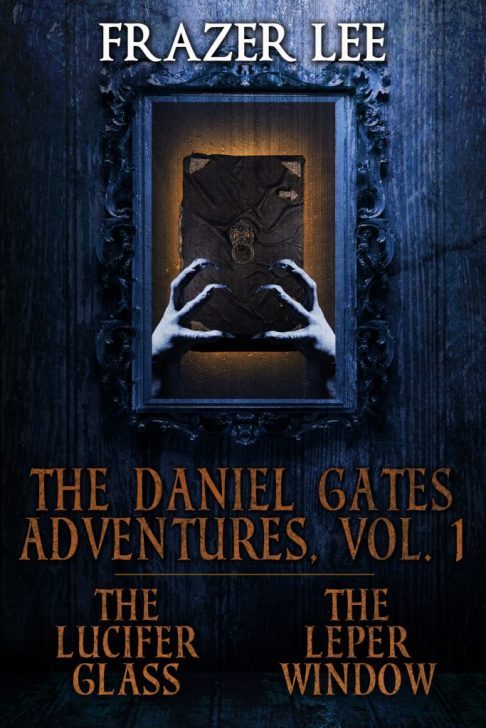